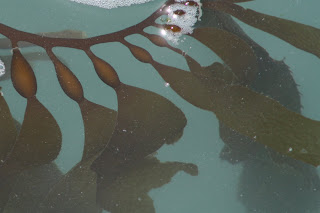 A highly nutrious seaweed that thrives around banks peninsula. the blades can be dried, then oven baked and eaten like a seaweed potato chip or ground down to make a seaweed "pepper". Once cooked blades turn a bright green colour and can be used to wrap seafood in. A fantastic resource. (PAL)

"It's a free, nutritious and a sustainable source of food. And to get it, all you have to do is get wet.

It's seaweed. And Sally Carson, of Otago University's Marine Studies Centre, says we should all be eating more of this hugely beneficial food.

Next month, at the New Zealand international science festival in Dunedin, she is organising a session dubbed "the incredible, edible seaweed workshop" to explain why we should eat it, and how to harvest and cook it.

Carson's love of seaweed began in her native Canada when she worked in a marine laboratory on Vancouver Island. "The wonderful thing about seaweed is that you don't have to worry about any of it being poisonous. It's all edible, it's just that some varieties taste better than others."

Carson's recommendation for gathering seaweed is to take the outer parts of an attached plant and to know where you're collecting it from. "One of the reasons that seaweed is so good for you is because it absorbs minerals and nutrients, but it also absorbs pollutants, so it should be collected in non-polluted areas."

After that take it home, rinse it in cold water, and dry it on the clothesline. "I'm not a particularly good cook so I tend to use it more as a herb. I put it in stir-fries, soups, on baked potatoes, pizza, and in spaghetti sauce."

When she really wants to make an impression she makes seaweed chips. "It's my signature dish and I think much better than potato chips. They're great with beer, quite addictive, and a really good conversation piece."

But it doesn't have to be dried. Varieties like Neptune's necklace, common to beaches, are "lovely and crunchy" in a salad, but be sure to chop it up so the seawater drains from the tiny bladders. And blanched undaria (kelp) with a dressing of chilli, oil, sesame seed and vinegar is "absolutely gorgeous".

CUT DRIED kelp into bite-sized pieces. Pour a thin layer of olive or sesame oil into frying pan or wok. Toss kelp continuously in the oil and let cook over a medium-high element for 2 to 3 minutes. Sprinkle with sesame seeds or honey. When green and crispy, take off the heat and drain on paper (should be hardly any excess oil)."
Posted by Peter Langlands at 1:38 PM